I guess people used to turn around the radio or television button to receive a particular station a long time ago. this behavior like tuned the machine so-called tuned in.

Now when you watching some YouTube channel this behavior has also been called tuned in this channel. 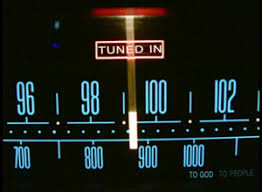